Additional Facts: The bald eagle, one of the largest and most magnificent of all North American birds, is our national symbol. Once endangered, it is now becoming more common. People have helped eagle populations by reducing the use of dangerous pesticides, by preserving eagle habitat, and by protecting eagles from being shot. Nearly half of Illinois counties have a nesting pair of eagles with a reported 263 active nesting sites. Many more eagles migrate to our state each winter, arriving from the northern states and Canada. They congregate along the Illinois and Mississippi Rivers, catching fish. A few eagles even spend the winter hunting and fishing around Lake Decatur. 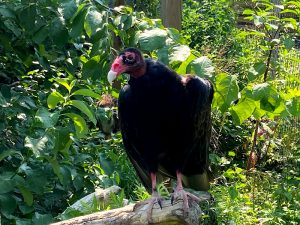 Turkey vultures have bald heads for a reason. They stick their entire head into some of the carrion (dead animals) they eat. Blood and other goo would stick to feathers, but on the bald head, it dries and falls off. Our vulture, Illie, is a female that was found along the side of the road in Illinois. She has part of her wing missing and cannot survive in the wild. Look at her curved, very sharp beak. Its shape is perfect for ripping and tearing whatever the sharp nose of the turkey vulture finds to eat