This group of mostly ground dwelling birds includes some of the most useful birds to humans. Domestic Game Birds (like the chicken) and other wild species (like pheasants, partridges, grouse and turkeys) are hunted for sport and meat. These birds can be found world wide. Most game birds are plump with a small head with short wings. They are built for rapid escape, but not for long flights because they are too heavy. Many of the males in this group are very colorful and ornate, to attract the female. Many of the females have pretty good camouflage, to blend in with surroundings while nesting. They can usually lay multiple eggs, up to 20 for some. Many of the chicks can fly within a week or so after hatching. Life Span: To 20 years or more in captivity.

Reproduction: The rainy season is the mating season for a wild peafowl. In captivity in Illinois, males, or cocks, begin courtship in late winter or early spring. The male displays his fan to the female, or peahen, turning his back to her before swinging around as he walks in a small semicircle. He vibrates the feathers of his fan periodically. When the hen is ready, mating occurs quickly. The male will mate with several hens, and no pair bonds are formed. The hen makes a nest, a shallow depression on the ground, under a shrub or among tall weeds. Sometimes, a hen will lie in the hollow between strong tree limbs or in an old hawk or owl nest. Egg-laying begins in mid-April. The hen lays 4 to 6 very large, pale brown eggs. If a nest is destroyed, the hen will re-nest elsewhere. Incubation lasts 28 days. The chicks grow slowly and stay with their mother for several months. The hen only raises one brood each year. Our Peafowl will roost in the trees at night (like they do in the wild.) They wonder around the zoo and can be seen about anywhere. The male Peacock will loose its long tail by mid summer and re-grow it for next Spring.

Sexual dimorphism in Indian blue peafowls is pronounced. The male has brighter colors and a very long train. The female is mostly brown and gray, and she lacks the train. The cock’s train is formed by the tail coverts, feathers that grow from the bird’s back and cover the 20 tail feathers. When the peacock is not displaying, the tail feathers are held horizontally, hidden beneath the folded train. When the peacock displays, the true tail feathers are raised to support the fanned train. The feathers of the train are molted each year, beginning in late summer. By late winter, new feathers have grown to make a new train. 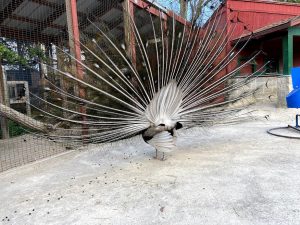 The peacock’s train evolved through sexual selection. Hens apparently favor long-tailed, colorful males for mating. Cocks with large tails have better chances of mating and siring offspring. The train may also allow hens to see the cock from a distance. The ritualized display may have developed from courtship feeding behavior, although the peacock no longer offers food to the hens. To maximize the effect of the display, the peacock often approaches the hen from an angle, with the drab side of the fan exp 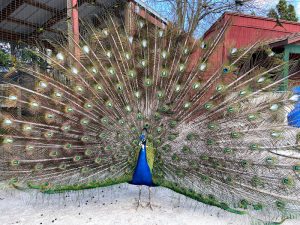 osed to her. When close to her, he suddenly swings around to dazzle her with shimmering “eyespots” vibrating and quills rattling. He may also call loudly.

Although the train increases the chances of a peacock reproducing, it probably makes him more vulnerable to predators. The train and colors make him more conspicuous and slow his escape. When courting, the spread fan blocks his vision behind him.

Both sexes have iridescent neck feathers, green in the female and blue in the male. The male’s train also has various iridescent colors. Three extremely thin layers of keratin on the upper surface of the feather reflect colors much as the thin film of a soap bubble does. The colors change with the angle of view. If you look closely at an eyespot on a peacock’s train feather as you turn it, the colors change to beautiful shades of blue, violet, green, copper, pink, brown, and yellow.

Except for the iridescent green feathers of the neck, the female lacks bright colors. Dull brown and gray feathers camouflage her as she incubates her eggs and cares for the chicks. 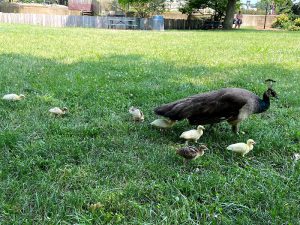 Young peafowls can first be sexed by the colors of their primary wing feathers. As the males grow, copper-colored primaries replace the first gray, primary feathers in the wing. The backs of young hens remain gray, while those of the cocks begin to show many fine black-and-white bars. Finally, young cocks begin to grow black feathers on the breast. The train does not develop until the cocks are three years old.

Young peafowls begin to grow their crown feathers when one month old. They strut and display when a few weeks old. Young cocks display before they have grown the long train. Hens, especially young ones, also fan their tails and display.

During the mating season, both the peacocks and peahens utter their loud meowing call. Some Indians believe this call means “There will be rain.” Peacocks call more frequently before imminent thunderstorms. Peafowls also make a loud honking sound when alarmed. Other animals respond to these warning calls, which may indicate a predator has been spotted. Tigers often prey on peafowls.

In India, peafowls are known to kill and eat small cobras. Some Indians protect the peacock as a symbol to the God Krishna. Peafowls are usually shy, entering open areas only during the early morning and late evening. But, where they are protected, peafowls roam fields throughout the day. Peafowls have been kept as ornamental birds for more than 4,000 years. Several breeds have been developed, including an albino one. Peafowls are often allowed to roam free in parks, where they roost at night in trees. Only in winter do they seek the protection of shelters.