Invertebrates are animals that have no backbones. They account for 97% of all known animal species. Vertebrates have one phylum (Chordata) that covers Amphibians, Birds, Fish, Mammals, and Reptiles. Invertebrates have over 30 phylum including sponges, cnidarians, flatworms, segmented worms, mollusks, arthropods, insects, centipedes & millipedes, crustaceans, arachnids, and more. Where vertebrates have endoskeletons (typically bony structures with an outer covering), invertebrates have exoskeletons (an external skeleton that supports and protects the animal.) So from the flatworm to the octopus, the stink bug to butterfly, invertebrates are very diverse. Here at Scovill Zoo, you will see all sorts of “free range” invertebrates. Look for ants, butterflies, spiders, bees, and beetles walking, flying, crawling, and standing motionless. We have a few invertebrates in our herpaquarium. We have Hissing Cockroaches from Madagascar, and several tarantulas.

Arthropods form the largest phylum of living organisms and account for more than three out of four species of animals. Arthropods include insects, centipedes, millipedes, crustaceans, arachnids and others. 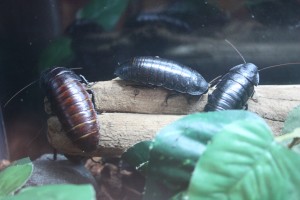 These are the largest of the Cockroach family. They are wingless and will grow to be 2 – 3 ½ inches long as adults. It produces a loud “hissing” sound to scare away predators. They are very common are actually kept as pets. Also known at the Madagascar Giant Hissing Cockroach, it is often used in movies for those creepy scenes we all love. You can find our Hissing Cockroaches in the herpaquarium. 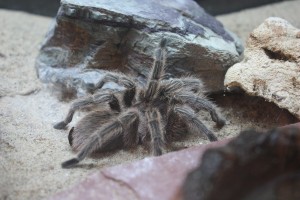 The Chilean Rose Tarantula is one of the most commonly imported tarantulas. It is fairly large, hardy, and docile. It can be a tan or brown color with pink hairs. They like to hang out under logs and other natural debris. All tarantula’s have a certain amount of venom. Most people are not affected by the venum, but some are allergic, like being allergic to bee stings. You can find our tarantulas in the herpaquarium.