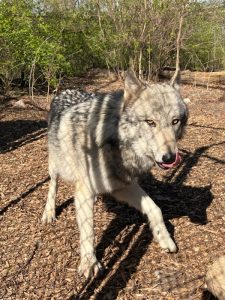 The wolf is the largest of the wild canid species. There are variations in size according to the region in which they are found. The Eastern timber wolf is a social animal and prefer to live in a family group or pack. A pack of timber wolves can have six to ten animals. This would include the breeding pairs and the pups at times. Here, the dominant pair is always in charge of the entire pack. These are the ones who select the areas to rest and the hunting grounds as well. Even though usually only the alpha male and female have pups, all of the wolf pack’s members take care of the youngsters. They bring them food, play with them, and also act as “baby sitters.” The Eastern timber wolves use various ways to communicate with each other. A variety of vocal sounds such as growling, and howling are used to indicate their behavior towards each other. These are also combined with various positions of the body such as flattening of the ears or having a stiff tail to even the hair on the back that can be erect or laid flat. All such patterns are used to communicate in various situations. Eastern timber wolves do not always make regular use of shelters. Here, the den is constructed for the purpose of giving birth and raising pups. This den is generally used for a period of 2 months. Such dens are located on slopes, ridges and are always found near sources of water. An Eastern timber wolf’s pack territory can cover 20-120 square miles. This itself shows that wolves require a lot of space. Timber wolves come in many colors, such as gray, black, white, tan or brown. The potential lifespan is 16 years with an average lifespan of 7-8 years in the wild. Males are usually larger than females.The male’s weight ranges from 44 – 176 lbs. with the average being around 88 lbs. Female weight ranges from 39.7 – 121 lbs. with the average being around 80 lbs. Wolves are carnivorous and primarily prey on large mammals such as deer, wapiti, moose, caribou, and bison.

There are many wolf organizations and government agencies working to protect wolves and educate people about them. The wolf was recently removed from the endangered species list although certain subsets of the wolf, such as the red wolf, are still critically endangered in the wild. The most common cause of death for wolves is conflict with people over livestock losses. Another serious threat is human encroachment into wolf territory, which leads to habitat loss for wolves and their prey species.

At Scovill Zoo we have two male wolves, named Koda and Niko. They are brothers born March 31, 2017 at the Washington Park Zoo in Michigan City. Niko has the light gray/white fur, while Koda has the darker coat. 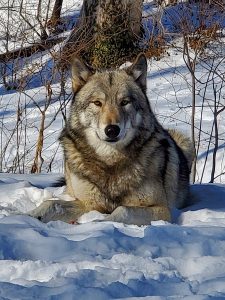 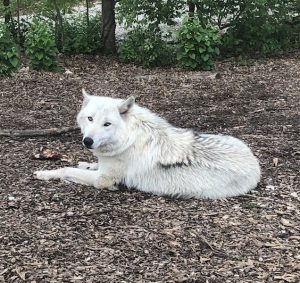