The Order of Primates has been recently divided into two sub orders. The first sub-order Strepsirhini includes lemurs, galagos, lorises, and pottos. The other sub-order Haplorhini includes tarsiers, apes, and monkeys. Humans also fall in this classification. Primates are social animals. They also have some of the larger brains in the animal world relative to body size. This explains their high intelligence. Most primates have hands with opposable thumbs, which means they can grasp and pick up items. The spider monkey does not have a thumb but uses its fingers more like big hooks to swing from branch to branch. A thumb would get in the way! In the wild, primates’ diets can range from leaves and fruits to insects and other mammals. 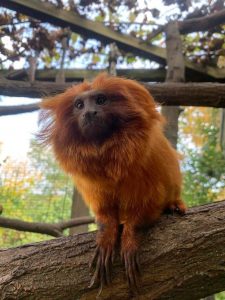 Our golden lion tamarins are located near the train depot in our South American exhibit. In the wild, they are critically endangered, because deforestation has removed their habitat. Tamarins breed well in captivity and over 150 captive born golden lion tamarins have been reintroduced to the wild. 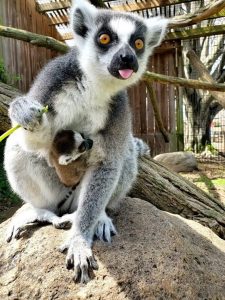 Lemurs come from the 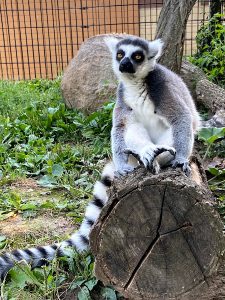 They are very social animals. A female will be the leader of the group with a well-defined hierarchy. They also like to bask in the sun. During sunny days, you will find the lemurs sunbathing, arms outstretched, and feeling good. Scovill Zoo lemurs are north of the Herp. 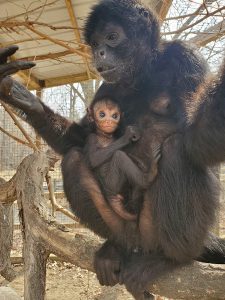 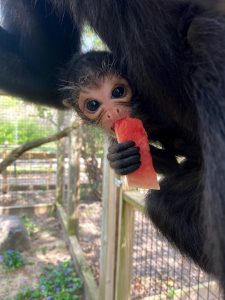 While monkeys are often depicted hanging by their tails, it is only some of the New World monkeys that can do this. The spider monkey has a well-developed prehensile, or grasping, tail by which it can hang. The underside of the tail tip is naked, and the bare skin has dermatoglyphics, or fingerprints,” and sweat glands that aid in gripping. An abundance of nerve receptors makes the tail very sensitive, enabling it to “feel” objects. Some individuals pick up things with the tail.

Although most monkeys have an opposable thumb with which to pick up small objects, the spider monkey lacks a thumb altogether, or has just a small vestige. The four long fingers form a hook used in swinging from branch to branch. The arms are also elongated, giving the monkey a longer reach. The spider monkey brachiates, or swings arm over arm, like a gibbon. In this type of locomotion, the thumb would be in the way and thus has been lost through evolution. The gibbon has a small, almost non-opposable thumb. But it has lost the tail, which is a hindrance in brachiation. The spider monkey has retained the tail, developing it into a grasping appendage that serves as a fifth “arm.” The big toe is highly opposable, and the hind foot is used for grasping. Besides brachiating, the spider monkey also walks on all fours, walks upright on hind legs, and swings by its tail. When walking upright, the tail often grasps objects to steady the animal.

As with other primates, the spider monkey has forward-facing eyes that give excellent depth perception, a necessity for judging distances. They also have good color perception. Spider monkeys are social, and group size varies throughout the year. When fruit is abundant, large groups form. When fruit is scarce, the large group breaks into small subgroups that forage over a wide area. Social grooming is not as important as in many Old World species. The lack of a thumb might be partially responsible for this. They make a variety of calls, including a whinnying sound.

Spider monkeys sometimes break dead branches from trees and drop them on intruders below them.

Some populations of spider monkeys are endangered. The monkeys are killed for food, but a bigger threat is the destruction of their forest homes. Tropical forests are being cut for lumber and cleared for cattle grazing and agriculture. Spider monkeys are also kept for pets, but they are not good for this purpose. They are virtually impossible to house break, and often become temperamental as adults.