Rodents represent over 40% of all mammal species. They are found worldwide except for Antarctica. Most rodents have long tails, clawed feet, long whiskers, and teeth and jaws specialized for gnawing. Some are solitary animals, but many are highly social and form large communities. Most rodents have acute senses of smell. They can adapt easily to different climates and habitats. Most rodents eat leaves, fruits, seeds and roots. Some specialize in eating snails, crayfish, ants, scorpions, and yes, discarded or stored human food. 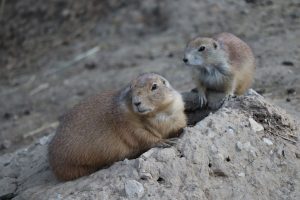 Our black-tailed prairie dogs (Cynomys ludovicianus) stay in their exhibit year-round. They have holes and tunnels all over and under their area. In the wild, they eat seasonal plants, grass, cactus, and brush. During the winter, they will eat roots and bulbs. They give a “yip” when keeping watch to warn others of danger. This danger could be hawks or other carnivores. At the zoo, they like to keep busy cleaning out their tunnels and playing. They are fun to watch. Look for them next to the alligators and meerkats.

Our chinchillas are used in our mobile zoo programs and will make visits in the zoo during special events. Chinchillas are endangered in the wild. This rodent has thick, soft, silky fur which keeps out the bitter cold in its mountain habitat. Where humans have one or sometimes two hairs coming out of a follicle, chinchillas can have up to sixty. Although the species is now protected, chinchillas were hunted and farmed in many regions. Our chinchilla are favorites of our volunteers during mobile zoo presentations. Being so well insulated, they rarely go out when the temperature tops 70. Chinchillas are also popular pets.

The domestic guinea pig is another popular pet featured at Scovill Zoo. Also referred to as “cavies,” the guinea pig most likely originated in South America, where indigenous people used the animal as a food source and in some religious ceremonies. Our guinea pigs can be found near the petting zoo area. They have a gestation period of sixty-five days and give live birth. The babies will have their eyes open, fur on, and will be running around in about an hour. The hair on a guinea pig can vary as well. There are short haired, long haired, blond, brown, or calico. Sometimes called a “whistle pig,” the guinea pig can make several sounds including a “wheeeek” (the whistle sound), bubbling or purring, rumbling, whining, and chattering.