The American Alligator is part of this Order of reptiles. Crocodiles, caiman, gavials, and alligators can be found in warm to tropical climates. The crocodile can be found in Africa, Southeast Asia and Northern Australia. The Caiman can be found in northern South America. The Gharial is the most unique of the crocs. It has a long skinny snout, or gavial, that can catch fish sideways. It then flips the fish around to swallow it head first. The male gharials have a bulbous nostril that they use to produce sounds and make bubbles during courtship. Alligators, Crocodiles, caimans, and gharial are related, but are different species. Gators have a wide rounded “U” shaped snout that packs more crushing power to eat prey like turtles. Croc’s have “V” shaped snouts. The Croc will have visible teeth when its mouth is closed. Crocs have special tongue glands that secrete excess salt from their bodies. Gators have the same structures, but they are nonfunctional. This means gators, unlike crocs, are almost totally restricted to fresh water. 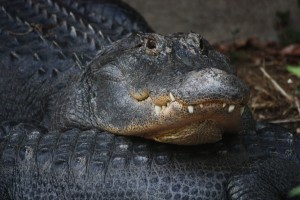 Order: Crocodilia
Family: Alligator
Species: mississippiensis
Range: The American Alligator can be found in Florida and in Southern States along the Gulf Coast, basically the southeastern portion of the United States of America.
Habitat: Wetlands and still bodies of water, including swamps, lakes, and streams.
Conservation Status: Common
Scientific Name: Alligator mississippiensis

The American Alligator can reach a weight of 400 – 600 pounds and a length of 9 – 16 feet. In the wild, gators will eat mammals, birds, reptiles, and fish. At Scovill Zoo, we feed our alligators an age appropriate diet. In the wild the alligator can live up to 35 – 50 years. At the zoo they can easily reach 50 years old.

The male roars to attract the female gators. Mating takes place underwater. Each female lays 25 to 60 eggs in an enormous nest made of vegetation and mud. She will dig it open when she hears the calls of the hatching young. She may stay with her brood for a year or as long as three years.

Alligators have evolved to hunt in the water. Their eyes, nostrils and ears are located on the top of their heads, so they can float in the water with very little of their body showing for hours at a time. It is a large, powerful reptile, black with a broad head and rounded snout, and has a heavily plated back. It also has a characteristic large fourth tooth that fits into a socket in the upper jaw. The alligator feeds in or near freshwater. During the summer, as water tables fall, it retreats to “alligator holes.” This is a small body of water it has kept open by digging out the sand or mud at the bottom. It feeds on fish that are trapped in the diminishing pool and animals that visit it to get a drink. The gator uses its tail to propel itself through the water. The hind legs have webbed toes and are used to steer the alligator. The front legs usually lie flat against the body while swimming.

The gators mouths have up to 80 teeth at any time and when old teeth wear down or are broken out, new ones grow in their place. Since they swallow their food whole, bigger prey either has to be stored under water to rot a while, or the gator will grasp the prey in its jaws and spin and thrash until chunks of bite sized flesh are ripped from the body. They have a valve at back of throat that shuts down when the gator is grabbing its prey so water does not rush down throat.

The American Alligator was once hunted for its skin and it became seriously endangered in the 1950’s. They are thrived and are doing very well. Texas is even considering having a hunting season for alligators because they are getting so numerous.

Scovill Zoo has two juvenile alligators used in our mobile zoo programs. FYI: It is illegalto have an alligator as a pet in Illinois, although it is legal in other states.