Snakes are highly evolved predators. They have no limbs, no eyelids, and no external ears. They can move with ease and find their prey using sophisticated senses. All snakes eat other animals, from ants to antelope. Snakes can not chew their food, but the bones in their skull are lightly constructed and loosely connected so the jaws can open wide and they swallow their prey whole. The snake will have up to 400 vertebrae that articulate on each other to give a highly flexible skeleton. Snakes kill their prey using different methods. Some snake species will swallow their prey alive while others constrict their prey before swallowing it. Other snakes produce venom and strike their prey quickly, waiting for the venom to take affect before eating their meal. 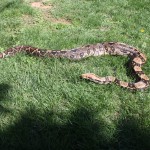 The boa constrictor is a docile animal. The number of boas in the wild is not well known. They have become rare in some parts due to the pet trade, destruction of habitat, and hunting. The boa can be 17 – 20 inches long at birth. Depending on the species, they can grow three feet long to thirteen feet long. It is very adaptable as you can see with its variety of habitats. It will suffocate its prey with its coils. Our boas Zeke (b. January 1975) and Bebe (b. June 13, 1990) can be found in the Herpaquarium.

This very large snake has excellent camouflage marking. The coloration varies from area to area, but the “arrowhead” marking on top of the head is constant. As with other pythons, they have heat pits along the jaws. Once it reaches adulthood in the wild, there are no natural predators that it needs to fear due to its sheer strength and size. Our Burmese Python is an “Albino” yellow python. He is not a true albino snake, but he is missing the darker pigment from his scales. Scovill Zoo’s Burmese Pythons name is Fang! 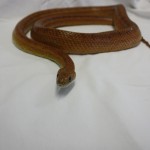 The corn snake is an eye catching rat snake. Corn snakes can be found on the ground, on the trees or buildings. Adult corn snakes feed mostly on rodents and are very useful around farms. If caught, they excrete a foul smelling musk. They can lay up to 25 eggs in decaying vegetation. Also called the red rat snake, the corn snake is named for its checkered belly, which reminded the early colonists of multicolored Indian corn. Corn snakes do well in captivity and are often kept as pets. Color mutants are often available, and quite popular, in pet stores. Two common mutations are anerythrism (a lack of red pigment that produces a gray body) and albinism (a lack of melanin, resulting in a bright reddish-orange body). They can grow up to 2 ½ to 4 feet long. In the wild they will eat young rats, mice, birds, lizards, and frogs. Our corn snake is ready for viewing in the Herpaquarium. 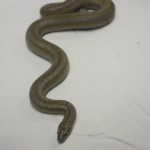 Desert rosy boas belong to the family of snakes Boidae, which contains some of the world’s largest snakes species, including anacondas, reticulated pythons, as well as many smaller forms. When threatened or disturbed, this small ground boa may coil up into a ball and tuck its head into the center of the coil. This provides its predators the smallest possible body and protects the vulnerable head from attack. On average, they are 24-42 inches in length and weigh 11-21 ounces; females are larger than males. They eat small mammals and birds. You can see our Desert Rosy Boa’s in the Herpaquarium. 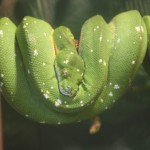 The Green Tree Python has adaptations for living in the trees. It is slender, has a prehensile tail, and its green coloration is great camouflage amongst the leaves. It will coil up on top of a branch with its head hanging down ready to strike at prey. Green Tree Pythons have heat pits around their mouth which aid in “seeing” prey in the dark by detecting infrared radiation from warm bodies. Females will lay 6 – 30 eggs in a tree hole or among plants. The young are either bright yellow or red and are hunted by birds of prey. They get their green coloration at about one year of age. You can find our Green Tree Python in the Herpaquarium. 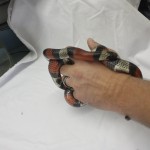 The milksnake is not venomous. However, the Pueblan milksnake mimics the coloration, markings, and even behavior of venomous coral snakes and is easily confused with them in parts of its native range. This adaptation is a form of defensive mimicry. If disturbed or uncovered from its hiding place, the milksnake may thrash around in an attempt to startle its predators with its vivid colors. It can grow up to 3 feet in length. Milksnakes are found in the southern portions of North America, northern portions of South America, and throughout Central America. They live in arid portions of its native range and found at elevations exceeding 5500 ft. They eat small lizards and snakes, birds, mice and other rodents. You can find our Pueblan Milksnake in the Herpaquarium. 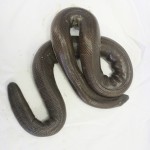 Range: East Africa; Egypt south to Tanzania; southwest Somalia west to Kenya
Habitat: Semi-arid desert regions. It avoids the midday heat, only emerging early in the morning and in the evening to go in search of food.
Scientific Name:Eryx johnii

Females are generally larger than males, reaching lengths of 26-32 (reports of up to 40) inches and weighing up to two pounds. Males only reach 15 inches in length. The Sand Boa are heavy body snakes with small heads, small eyes, and short tails. It has a thick, strong body with no defined neck. With its very smooth scales it is able to glide thorough the soft substrate without surfacing. Its eyes and nostrils are located on the uppermost parts of its head, thus allowing it to lie buried under the surface, with only these organs protruding. The smooth scales give the body a very glossy appearance. Its basic color is yellow, with an irregular pattern of brown bars and blotches. In the wild they will eat small rodents and reptiles. Once it has caught a small mammal or reptile, it constricts in typical boid (boa) fashion before swallowing the prey whole.

This desert-dwelling reptile spends almost its whole life buried in the sand, quite invisible. It lives hidden under stones, in the burrows of rodents, and in the sand. If there is any danger the sand boa buries itself headfirst and carefully in soft ground.

When in our Herpaquarium, look at the snake’s head and tail. It is hard to tell which is which. This is an important physical adaptation. If a predator is pursuing the sand boa, the snake will dive into the sand headfirst. Because the tail looks so much like the head, the predator may grab at the tail while the snake’s head is burrowing farther into safety. If the tail is struck, there are no major organs located there (unlike the head).

The black rat snake can reach five feet long. It has a slender body and a wedge-shaped head. Common rat snakes tend to be shy but some adults will protect themselves and strike if provoked. Some will shake their tails in dead leaves to simulate a rattle. Rat snakes produce a foul smelling musk and release it on predators if they are picked up. Their diet is mostly rodents. Juvenile rat snakes will eat small lizards, baby mice, and small frogs. Adults may indulge with an occasional chipmunk, mole, bird eggs and young. Rat snakes kill their prey by constriction. At the zoo, the rat snake is fed mice, rats, and occasional chicks. Female rat snakes lay 12 – 20 eggs in the summer and the eggs hatch 65 – 70 days later. Rat snakes help control rodent populations around farms and country side. Although there is that startle factor and fear of snakes, humans would do well to set the hoe down and let the snake do its rodent hunting job. Scovill Zoo’s rat snake is on exhibit in the Herpaquarium. (Source: Animal Diversity Web and Museum of Zoology of the University of Michigan)